Allyship in business: battling racism and discrimination with Cephas Williams and Caroline Casey

When we talk about businesses changing for the better, often we hear the phrase “diversity and inclusion” as an area for improvement. And yet the issues of discrimination and equal opportunity in business are broad, it’s impossible to capture the struggle of so many different people and communities with one sweeping phrase.

There are issues such as racial discrimination, gender diversity, the inclusion of differently-abled people, LGBTQ+ representation, and many, many more. These areas each have their own change makers – the campaigners and activists working hard to bring real and lasting change so that no one is discriminated against or left out.

Two such campaigners shared their stories with us here at Change Makers. They are pushing for change for two very different communities and yet, both found 2020 to be a momentous year – and one that will hopefully create a lasting and positive impact.

We talked to Cephas Williams, founder of the 56 Black Men campaign about changing the narrative on young British black men and putting a stop to their discrimination – and we also spoke to Caroline Casey, founder of The Valuable 500 about opening up the business world to people with disabilities.

Here’s what they had to say about creating change and the next steps businesses can take to make a difference. 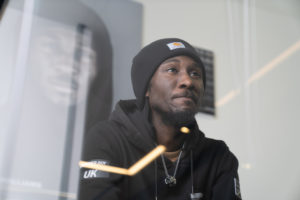 For the black community, 2020 was a year of great pain. One that will be remembered for heartbreaking reasons. But one that also signalled the potential for real change. A number of brutal murders of black people, most notably that of George Floyd and Breonna Taylor, sparked a series of protests across the world in which millions of people demanded not only justice for these killings but also a commitment to end racism for good.

While Cephas recognises the opportunity to open people’s eyes to the everyday racism and violence against black people across the world, he also cautions that we have been here before. “For me, almost every moment and every time, it feels like a watershed moment. And then it’s almost like the world goes back to sleep again.

“So, for people that might be plugging into the conversation for the first time – black people are not saying something new, they’re saying what we’ve been saying for centuries. Do I see change? Yes and no. Change isn’t just about people becoming aware of the situation and standing up against it. It is about doing something tangible and practical.”

Cephas, who launched a new campaign, Let’s Not Forget, has had people from the business world contact him asking what they can do. “I don’t think they’re asking for one direct answer, I think the conversation is: ‘I’m open, I’m available, educate me and work with me so we can inform a better landscape for black people.”

Cephas’s advice for business is not to say nothing, for fear of saying the wrong thing. “When people ask what they can do the first thing I say is ‘speak.’ One leader recently told me they didn’t know what to say but felt what was happening was wrong. I told them ‘put that in a statement and follow it up with real commitments for change’. Business we can lose our understanding of what it is to be a human being. Be a human first and express your human views.”

Caroline Casey has been on a mission to get businesses to commit to putting disability inclusion on their agenda for many years. Her campaign The Valuable 500 has been recruiting leaders since launch in January 2019 – asking them to table disability on their board agenda. The business response to the Covid crisis has given Caroline even more conviction that real change can happen.

“We’re all working from home. We’re all having to be remote workers. And this is how a lot of people with disabilities that have been working for decades and business have said before ‘oh no it’s too expensive to accommodate people with disabilities who have mobility issues.’ Now look what just happened – the system proved it can adapt and change and we’re calling it agile and flexible.”

There are two important things to note about the post-Covid world, she says. “The first thing is that business has proved it can change things if it wants to seize the opportunity. The second thing, that I find exceptionally exciting, is that a lot of the solutions that we’re going to have to design into our buildings, our businesses – the likes of automatic doors and new communication tools – the intelligence for that innovation is within people with lived experience with disabilities. I think that’s really important for the first time ever, maybe this community can be seen as a source of insight and innovation.”

Casey calls for businesses to join the Valuable 500 and embrace the ethos and the systemic changes it calls for. “Our first intention was to build this community, the next stage will be to activate this it – to use the power and the influence of these brands and leaders to really transform their systems internally and externally. We are creating a safe-space where companies can share best practice.

She believes inaction poses a risk to businesses. “The world will not tolerate leaving people out anymore. This is future-proofing brands. We are no longer in a position to leave out 15% of the population. We have dialed up voice – we have seen how the system can change – we can’t forget that.”