Hosting a year of Change Makers

From Baroness Helena Morrisey and Lord Bilimoria to Lord Dubs and Beatie Wolfe, via Arizona Muse, Michael Morpurgo and General David Petraeus; these names, with hugely different career trajectories and spheres of influence, are united by an active commitment to change.

Their fascinating lives and opinions have been explored over the past year as part of Change Makers, powered by Seven Hills. “A tapestry of tales about the human experience” is how its host – entrepreneur, author and broadcaster Michael Hayman – describes the podcast. “I’m speaking to the contrarians and the positivists in challenging times – think of it as a Canterbury Tales for the lockdown era. At its heart are the many different experiences that shape lives.” Michael has interviewed activists and writers, politicians and business leaders about the experiences and ideas that have shaped their lives, the insights they can share as a result and thoughts on ‘what’s next’ for the world.

The podcast launched in May 2020 but prior to that, Michael had hosted Change Makers as an annual event to bring together the many people who seek to deliver on the promise of business as a force for good. “I was encouraged by one of our early guests, big data pioneer David Richards, to turn it into a podcast. It was very much his encouragement that got me thinking about it. With the pandemic, it became clear this was a time where countercultural thinking was going to lead the way and give us the breadcrumb trails to what the future might look like. Change Makers has always been a big idea because it was all about the human experience, and how to try and flip life from a glass half empty to a glass half full.”

“It really captures what Change Makers is all about, telling the stories of people doing incredible things – names you’ll know, and those you won’t have heard of before.”

Of utmost importance, says Michael, has been knowing how to listen; really listen. “Our guests have such incredible stories, and when you listen carefully you can think differently and in so doing, help to reveal an inner truth.” He does prepare a ‘story arc’, following extensive research, which aims to open up where a guest’s story might take him. “Sometimes you call it completely wrong. [Economist] Yanis Varoufakis, for example – my research had told me that this was a man who had made up his mind, and that’s what gave him the firepower of belief and certainty. And as it turns out that wasn’t the right story; he’s full of doubt and questions about his views and where things go from here. It reminded me: ‘Don’t die by your own script; listen to what’s being said.’ I go in very well prepared, but it’s also my responsibility to follow where a guest is taking me.”

This takes confidence, and the experience gained by conducting nearly one hundred episodes of Change Makers, and counting. A pivotal interview came with Russ Shaw. “At face value it was the story of a very successful American technology entrepreneur,” explains Michael. “Once we got going, it became quite clear there were interesting, important parts of the story not commonly told… My established script was null and void. I felt that it was a breakthrough interview; the podcast took on a different style [after that], to try and get behind the story.”

This style is fast-paced, affectionate, humorous and “with, we hope, reach for listeners”, says Michael.

It’s a home for meaningful conversation, where Michael asks questions on behalf of listeners, one of whom described the podcast as ‘ego-free interviewing’; Michael’s response is to point out that “the problem with a lot of celebrity interviews is that their ‘celebrity’ can get in the way of the questions. Good interviewing is about good questions, and putting guests at ease”. 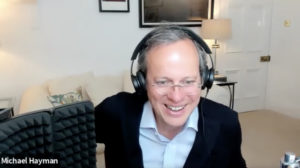 While this is a priority, Michael admits he does get nervous. “I feel amazing afterwards – usually I’m fizzing with ideas and a huge amount of gratitude to have been in the company of people who are choosing to reveal something about themselves. The run-up is a bit like revising for an exam; cramming a lifetime’s worth of knowledge into 30 minutes, so I can do justice to all of the nuances of a conversation, and get beyond the often-told story. Fortune favours the prepared mind – it’s my favourite quote, because all the preparation doesn’t go to waste if it supplies you with a really powerful backstory and understanding.”

Michael ends by recommending Ara Kusuma’s episode (turn to page 18 in the magazine for a preview) because “it really captures what Change Makers is all about, telling the stories of people doing incredible things – names you’ll know, and those you won’t have heard of before. I’m interested in the stories of people’s lives, because most lives are fascinating.”