Change Makers is proud to celebrate Black History Month, and the richness of black heritage and culture that has contributed to shaping our world today. Join us as we reflect on some of our guests’ inspiring stories and achievements, and the change they hope to bring for our generation and those in the future. 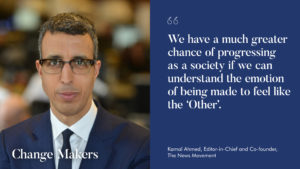 The idea of identity: the life and times of a very British man – Kamal Ahmed, editor-in-chief and co-founder, The News Movement

At a time when “trusted, impartial news has never been more vital,” our recent guest Kamal Ahmed says he is taking lessons from almost 30 years in the newsroom to the News Movement, where he is on a mission to address a “global crisis of information”.

As editor-in-chief of the News Movement, the former editorial director of BBC News is aiming to sew the seams of unity back into public discourse and to deliver objective and trustworthy information for a digital generation.

A desire to tackle division is also what informed Kamal’s own book, The Life and Times of a Very British Man, a memoir of a son, and his two parents whose differing colours and cultures combined to make him the whole he is. It is about the history of and indeed resistance to immigration in the UK, and a celebration of the role immigrants play in our society.

Talking about his Sudanese heritage in the book, Kamal says, “The romantic red dust of the Sahara is not mine, the call to prayer is not mine, not in the way the River Thames is mine, the sands of a Devon summer holiday beach are mine, a pint down the pub is mine. I am as British as they come, like hot buttered toast and bacon sarnies. And still something of an alien in my own country.”

This month, his book was also included in Trevor Phillips’ Black History Month guide to the best books and films to read and watch to understand the black experience. You can find the full guide, published in The Times, here. 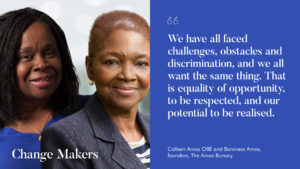 With a message for the importance of education in driving change, Michael is joined on Change Makers this week by Colleen Amos OBE and Baroness Valerie Amos, founders of The Amos Bursary – the London charity creating opportunities for young people of African and Caribbean heritage to excel in education and beyond.

Colleen has transformed the lives of countless young men to secure professional careers by developing them into the UK’s future leaders through her expert skills of bringing together elite universities and leading international firms, providing internships and personal development programmes.

Baroness Amos, now a patron of the charity she co-founded, has been widely recognised as one of the world’s great humanitarians. Whether as UN-Under-Secretary-General for Humanitarian Affairs, in the Cabinet as a member of the House of Lords, or any of a countless list of charitable and educational roles, Baroness Amos has been a pioneer for equality everywhere.

Discussing the legacy they wish to leave for future generations, the sisters say: “We have all faced challenges, obstacles and discrimination, and we all want the same thing. That is equality of opportunity, to be respected, and our potential to be realised”. They open up about the importance and inspirations of their family, being part of the Windrush generation, and why the charity has for over a decade focused on young men and for the first time in 2021, will open up to women. 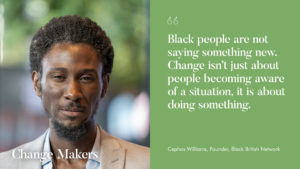 Fighting stereotypes, tackling racism and changing the narrative through the Black British Network – Cephas Williams, founder, Black British Network
In his first Change Makers conversation, Cephas shares how he recognises the opportunity to open people’s eyes to the everyday racism and violence against black people across the world, but he also cautions that we have been here before. “For me, almost every moment and every time, it feels like a watershed moment. And then it’s almost like the world goes back to sleep again.

“So, for people that might be plugging into the conversation for the first time – black people are not saying something new, they’re saying what we’ve been saying for centuries. Do I see change? Yes and no. Change isn’t just about people becoming aware of the situation and standing up against it. It is about doing something tangible and practical.”

Cephas, who has since launched the Black British Network, says that his advice for business is not to say nothing, for fear of saying the wrong thing. “When people ask what they can do the first thing I say is ‘speak.’” 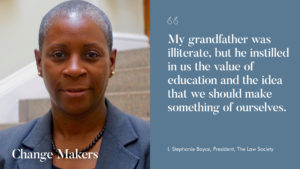 Injustice in the world: how to correct it – I. Stephanie Boyce, President, The Law Society

Vice President at the time of her Change Makers conversation, now President of the Law Society of England and Wales, Stephanie Boyce is only the sixth woman and the first black person, or indeed first person from any ethnic minority background, to hold the post in its almost 200 year history.

Her family say they came to the UK from the Caribbean in search of faith, hope and opportunity, and in this episode Stephanie talks about how her granddad is one particular inspiration for her achievements. “My grandfather was illiterate, but he instilled in us the value of education and the idea that we should make something of ourselves.” 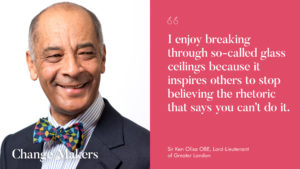 Do well, do good: Why it doesn’t matter where you start from, it’s where you aim to get to that makes the difference – Sir Ken Olisa OBE, Lord-Lieutenant of Greater London

Sir Ken Olisa is a business leader, philanthropist and Her Majesty’s Lord-Lieutenant of Greater London. But if you think his story is one of a gilded life, you’d be wrong. Of his own childhood Ken has spoken of “a world of outside toilets and bomb sites as playgrounds,” leading him to note that it doesn’t matter where you start from, it is where you get to that makes the difference.

Realising his ambition as the founder of two merchant banks focused on the technology sector – one of which, Interregnum, he floated at the height of the dotcom boom in 2000 – saw Sir Ken becoming the first British-born Black man to serve on the board of a major UK public company and, later, being named by The Powerlist as one of the most powerful Black Britons. When talking about what drives him, Sir Ken said “I enjoy breaking through so-called glass ceilings because it inspires others to stop believing the rhetoric that says you can’t do it.”

Today, he dedicates his time as founder of the Aleto Foundation, a charity and leadership programme supporting the future leaders of tomorrow. He discusses all of this, why he chooses to “do well and do good”, and his idea of The British Dream, in this edition of Change Makers. 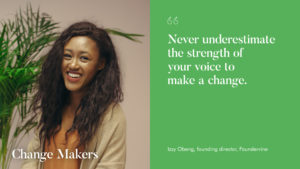 Her business has since helped over 2,000 diverse, future leaders create, test and sustain entrepreneurial ventures globally. In her conversation with Michael, Izzy shares her experiences that drove her growing up in Tottenham, the importance of ensuring all communities have a voice, and why she believes business is the fastest route to social change.

The advice she leaves us with? “Never underestimate the strength of your voice to make a change.”

Coming up later this year…